sorry, i'm for free speech and all, but i find this downtown rally disgusting and scary! 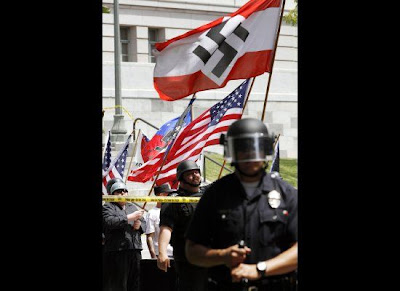 A white supremacist group rallied against illegal immigration in downtown Los Angeles Saturday as hundreds of counter-protesters gathered to shout them down in a tense standoff that included several arrests, thrown rocks and police in riot gear.

Police officers stood between the white supremacists and counter-demonstrators on the south lawn of Los Angeles' City Hall, where about 50 members of the National Socialist Movement waved American flags and swastika banners for about an hour. 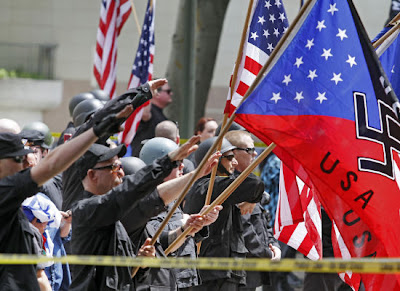 i also find it disturbing that you cannot tell the white supremacists from the police!
Posted by Antebellum Gallery at 8:09 PM No comments: Links to this post 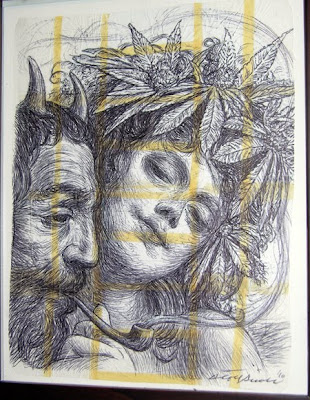 this ink drawing on zigzag paper is by SCOTT SIEDMAN entitled~ "THE SOURCE"
a stayar smoking a pipe dances with a nymph wearing a garland of cannabis.

Posted by Antebellum Gallery at 7:54 PM No comments: Links to this post

Email ThisBlogThis!Share to TwitterShare to FacebookShare to Pinterest
Labels: 420, antebellum, ART, BEAUTIFUL, event of the season

WFT! talk about animal husbandry... this story takes it to a different level-

A guy in rural washington state has been arrested for running what authorities say appears to be a bestiality farm in Washington state in which visitors could engage in all sorts of twisted sex acts with animals.

Douglas Spink was arrested at his ramshackle, heavily wooded compound near the Canadian border in Whatcom County along with a 51-year-old tourist from Great Britain who is accused of having sex with three dogs.

Dozens of dogs, horses and pet mice were seized, along with what investigators described as thousands of images of bestiality and apparent child pornography. The mice were euthanized, said Whatcom County Sheriff Bill Elfo, whose office assisted federal agents in the case.

"This stuff is just truly bizarre," he said. "These were mice that had their tails cut off, they were smothered in Vaseline and they had string tied around them."
READ MORE-

BTW, if any of you remember the film ZOO, which i screened @ THE FETISH FILM FESTIVAL last year, there is a conection to this guy and the person that died in the film- "MR. HANDS."
Posted by Antebellum Gallery at 9:24 PM No comments: Links to this post

my neighbor~ design ASHTON HIROTA, doing what he does best, relaxing & drinking in SHOEZ! 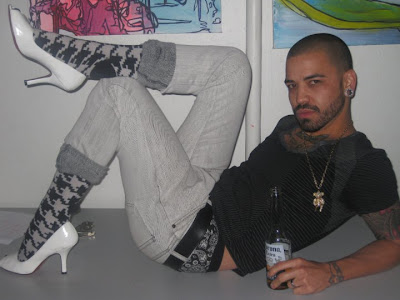 Posted by Antebellum Gallery at 9:09 PM No comments: Links to this post 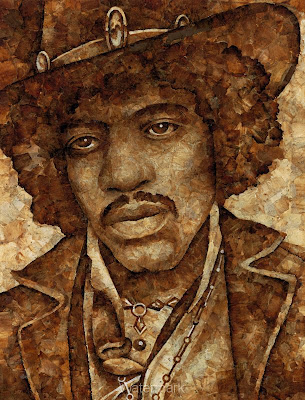 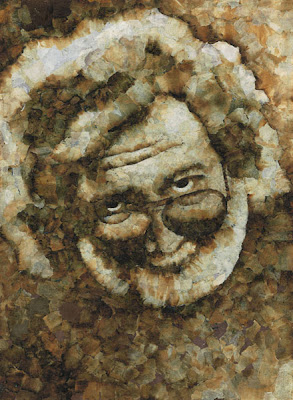 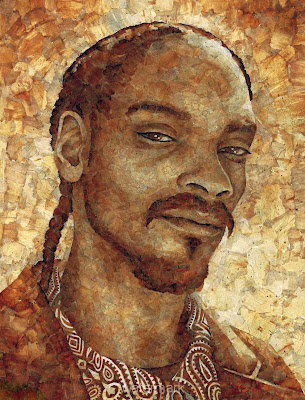 cliff creates one-of-a-kind mosaics entirely from cannabis roachs. the detail is unbelievable.
using an Xacto knife to dissect each paper, cliff's portraits can take up to 70 hrs of solid non-stop work.
the detail is amazing.... you must check them out in person.
opening night- tuesday~4/20/2010, (of course)

Posted by Antebellum Gallery at 12:33 AM No comments: Links to this post 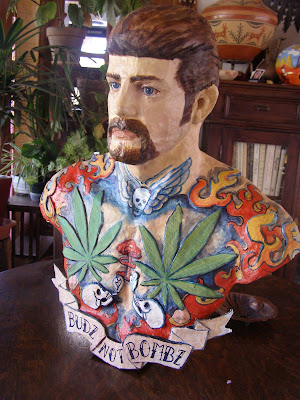 our 420~CANNABIS AS ART exhibition promises to be our biggest most controversial event to date.
the artists and participants keep coming in..

as of today- april 14th, here is our artists list-

BETTY BLANCA AKA BETTY WHITE is the "it" girl of 2010. here is a little culture/time clash for you-
a clip from the film- ADVISE & CONSENT, (1962, directed by otto preminger) featuring betty white in her FIRST FILM ROLE!

Posted by Antebellum Gallery at 2:39 PM No comments: Links to this post

Email ThisBlogThis!Share to TwitterShare to FacebookShare to Pinterest
Labels: back in the day, CUTE, film, history, memories, WTF 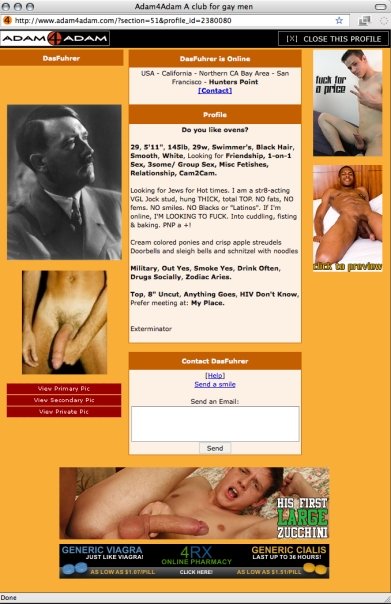 I'm Always Touched (By Your Presence, Dear)
–An Ode to Adam4Adam.com–

Should i start by listing my favorite band names,
Or when i "travel" how i've often rode the Thames?

How about i list the kinds of guys i hate?
Or would u rather a list of the gays i date?

Mama didn't say there'd b days like this,
Should i risk my health 4 a toothy dick-kiss?

Racists, bigots, fools, oh my,
Where is my man? Is he busy on high?

Lookin' 4 love in all the wrong places,
What did u expect in this sea of banal faces?

Hotties, naughties, trannies, oh dear,
Must i give my left nut 4 a suitable queer?

No fats, no fems, PNP, "Online inchen'"
Mary said he was hung THICK like a KKK lynchin'

Looking for Hung, you son of a gun?
Who isn't you nit, stating so's just dumb.

Swimmers, vegans, jerks & mouse-clicked-smirks
Some go faceless, showing only cock when he lurks.

Twinks, Otters & Bears, Too Sexy? I doubt it.
Hilarious n modest? I'm 'bout it 'bout it.

With nothin' 2 go on but a nipple n a peck,
Can u blame me if i cringe or if i jump deck?

Meet 4 a coffee? I'm down like a frown,
I'll swim there through the tears of Gacy the clown.

Muscle Worship, Cock-Suck, Top, Bottom, or "Vers,"
Pray that he's not "Down to Earth" 4 there'd nothin' b worse.

My place or yours? I'll b waiting on all fours,
My door b unlocked, i'll b blindfolded indoors.

Or how about i just tell u how big it is & where'd I'd stick it?
Yeah, "boi," we all know that's just the fucking-hole-ticket.

in celebration of the "underground," holiday of 420, ANTEBELLUM gallery is presenting 420~ CANNABIS AS ART, the first ever art exhibit to present the fetish, obsession, passion & fervor of cannabis.

here's a clip of the humble beginnings of the movement and the inevitable passage of legalization this november. 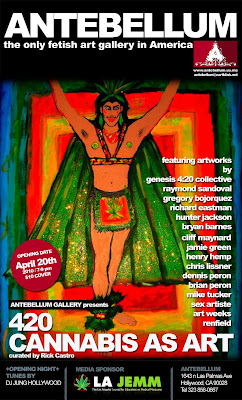 the only fetish art gallery in america, (and perhaps the world!)
continues it's tradition in presenting original ideas in art

Email ThisBlogThis!Share to TwitterShare to FacebookShare to Pinterest
Labels: 420, ART, back in the day, BRAVE NEW WORLD, fetish, history, shock of the new

my sexy cyber buddy- GNIBOU NEBIE, is run for MR. GAY TETU, the french magazine, (who i photographer for) that is all things~ "GAI"
this contest is perfect, especially since I'm addicted to him.

Gnibou is the third candidate who has been hand-selected.
to participate in the election of Mister Gay April, VOTE HERE-
www.tetu.com / mistergay
Posted by Antebellum Gallery at 5:00 PM No comments: Links to this post