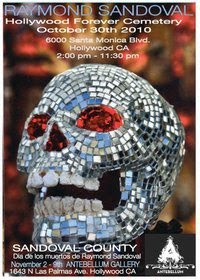 ok skeletons, here's the event you have been waiting for! 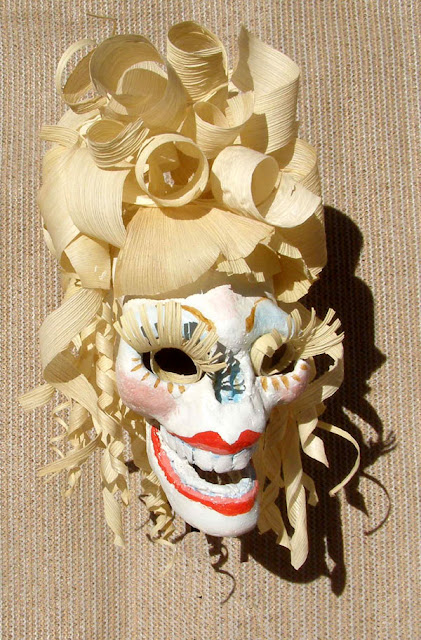 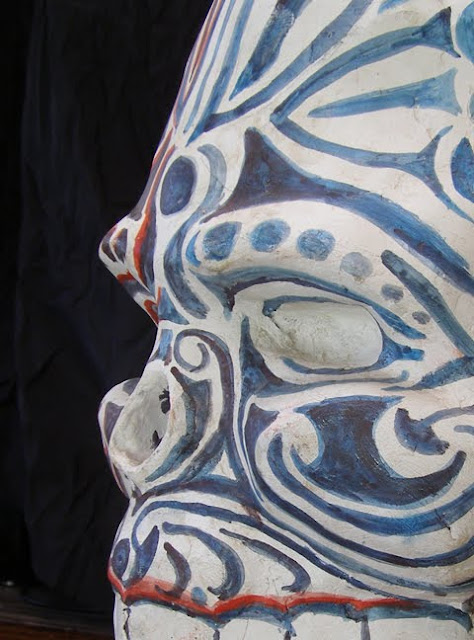 this event is one of the most interesting celebrations of the year. HOLLYWOOD FOREVER will have the graves dressed as is the tradition. there will be live, (and dead) music & performers, food booths, and arts & crafts.
look for us @ booth #44 just to the left of the front entrance of the cemetery.

we are directly across from this building~ 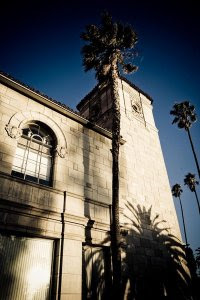 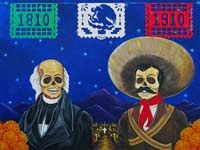 PLEASE REMEMBER:
NO CHAIRS
NO ALCOHOL
NO GLASS CONTAINERS
NO COOLERS
NO SKATEBOARDS
NO WEAPONS
NO DOGS (except for service animals)
NO BEACH UMBRELLAS
NO INS & OUTS

It is very important that you plan where to park before you depart to attend this celebration. We recommend carpooling and the use of Taxi services if possible. 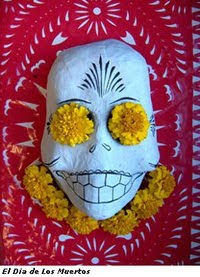 CREATE YOUR OWN DAVID BOWIE COSTUME 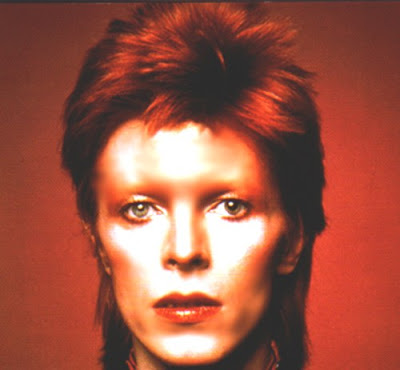 Posted by Antebellum Gallery at 7:17 AM No comments: Links to this post

THIS IS THE MAINSTREAM NEWS IN TEXAS

.... and we think FOX news is bad?!
believe it or not, this is a real news channel in texas.
KETK-NBC news anchors ask: “Will the acceptance of homosexuality in this society be the downfall of America?”

Yes, that was a question actually posed to viewers by a Texas-based NBC affiliate TV station, both on the air and online. But it didn’t end there. The station then went on to broadcast responses from viewers -
- some of the most vitriolic attacks on LGBT people that you will ever hear on a network affiliate.

to me this signifies the last ditch attempts of the christian-right to fight back at what they view as their world coming to an end.
it sounds awful, but i can guarantee you in a couple years this broadcast will be as dated as when you see a cartoon with little black sambo.
using gays the demons of society will become dated.... very soon... mark my word.
Posted by Antebellum Gallery at 8:57 PM No comments: Links to this post 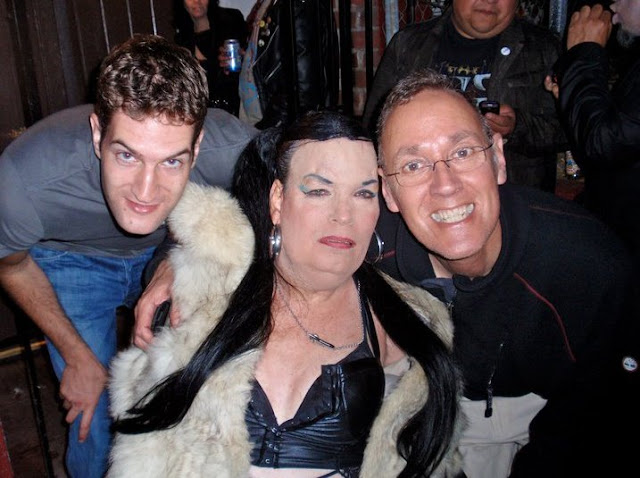 reborn-country-christian-gay-post-punk-pop- crooner-
GLEN MEADMORE is making a comeback these days.
originally hitting hollywood hard in the early 1980s,
glen, ( i call him penny) set the LA music/art scene ablaze with on-stage antics like- sticking a chicken head up his ass, attacking an entire audience, doing the spider-walk in drag, and taking the pants off of cute boys in the front row.
i also fondly remember that time he got fucked by a german shepherd, but that was off stage.
glen also had the honor of opening for JAYNE'S ADDICTION in 1988, and being booed by the entire homophobic audience. (my how times have not changed) ~ " thank you!," was glen's appropriate response. 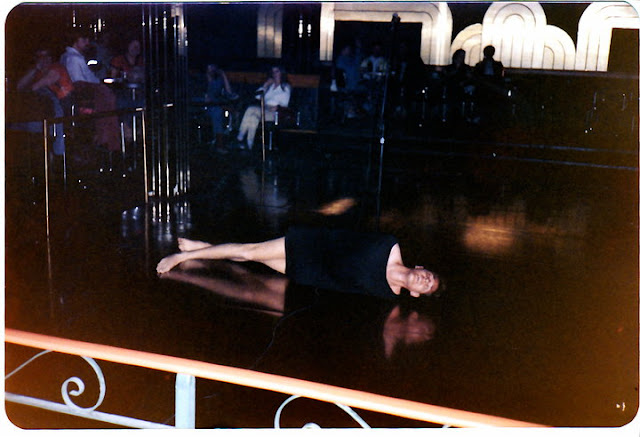 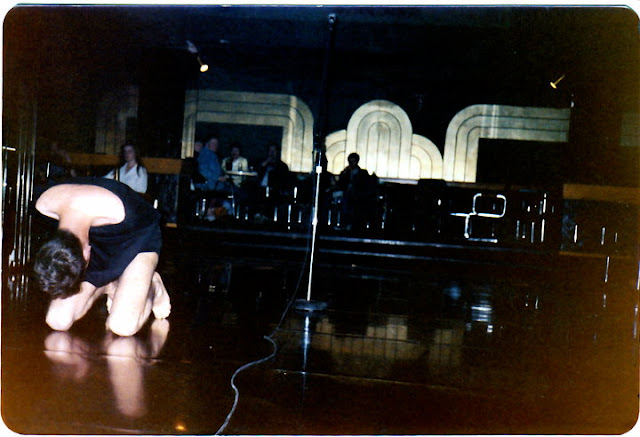 (glen meadmore- circa 1977 in winiepeg, canada)

glen meadmore will be performing @ 3RD KINKY CABARET on december 16th, and a reunion with ROZ WILLIAMS during january, hosted by ANTEBELLUM gallery. 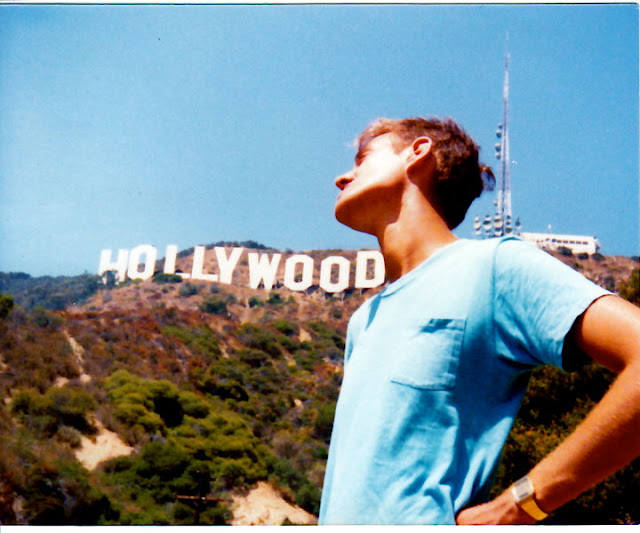 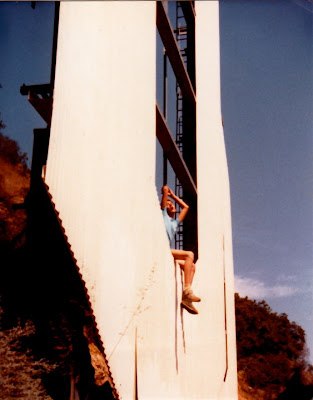 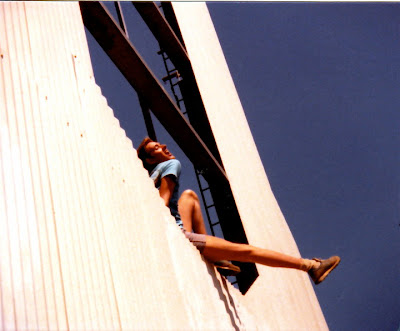 (glen meadmore on top the hollywood sign- circa- 1978)
Posted by Antebellum Gallery at 10:52 AM No comments: Links to this post

DO YOU HAVE PRINCE ALBERT IN A CAN?

WELL YOU BETTER LET HIM OUT! 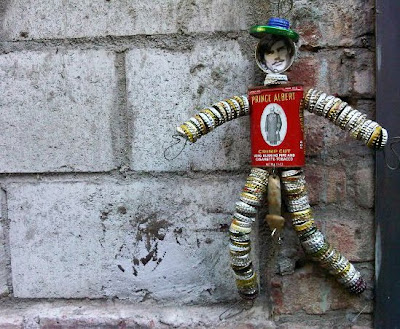 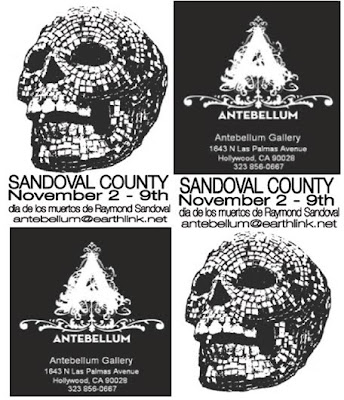 as is the tradition of DIA DE LOS MUERTOS,
antebellum will once again create an alter in the gallery window honoring our loved ones no longer with this world,

you are invited to submit an image of your dearly departed for our display celebration on NOVEMBER 2ND, 2010.

from now until november 2nd, please bring in, mail or email, (antebellum@earthlink.net)
and image of your loved one for inclusion.

the gallery will be open wednesday thru friday- 1pm - 7pm

we prefer pre-framed, but will provide frames if necessary.

small sizes are preferred, no image larger than 8x10 please.

exhibition will be on display thru november 9th. you can pick up images at that time.

Posted by Antebellum Gallery at 7:28 AM No comments: Links to this post 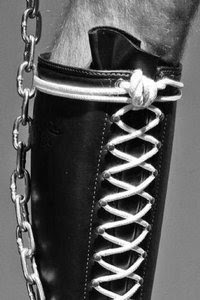 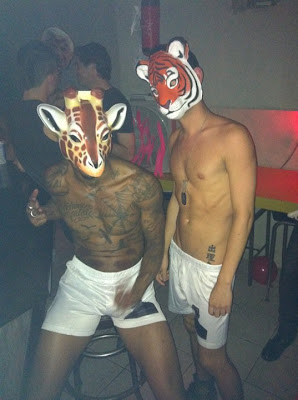 photo courtesy- the fearless project
Posted by Antebellum Gallery at 5:55 AM No comments: Links to this post 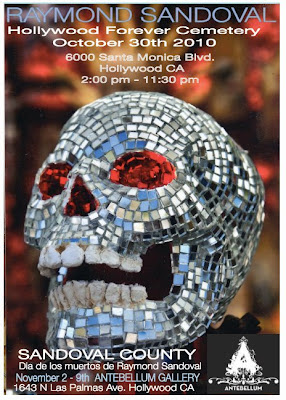 dia de los muertos, (day of the dead) is upon us!

ANTEBELLUM will present two events celebrating this tradition...
with a twist of course.

on OCTOBER 30TH @ HOLLYWOOD FOREVER CEMETERY, ANTEBELLUM and artist RAYMOND SANDOVAL will have an art booth as part of the celebration in the cemetery.. this event has become tremendously popular. last year forty thousand people attended the celebration!
the atmosphere is amazing and other worldly. graves are dressed for the evening, live performances go on continuously, traditional food booths, costumes, and of course art booths.. look for our art booth at the entrance of the cemetery. 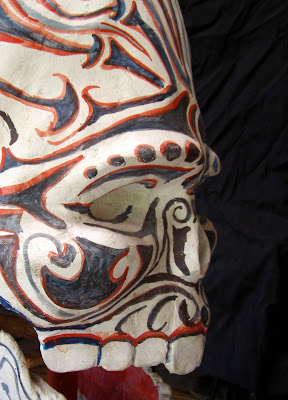 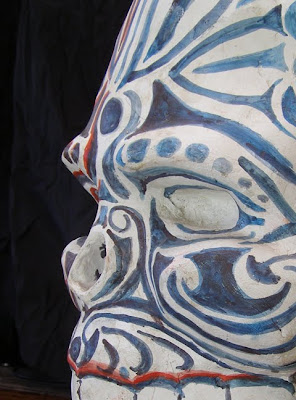 then on NOVEMBER 2ND, (which is the traditional date of the celebration) ANTEBELLUM GALLEY will present~ 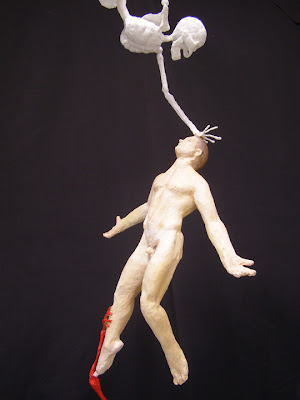 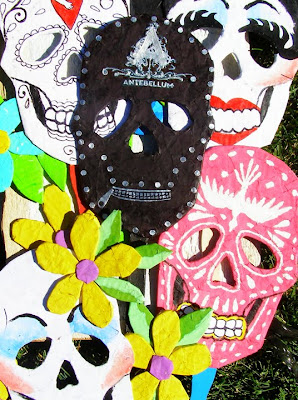 this event is for adults only. don't bring the kids.

RAYMOND SANDOVAL
is an artist using the traditional influence of dia de los muertos, ( day of the dead) working with paper mache and found wood. raymond uses the figure as language, as he conveys a message or feeling into the work the art becomes the messenger. 'My work is a result of working where there is seemingly nothing, allowing myself to be irrational and emotional, then with a measure of faith, I intuitively make an image.'

His most well known work is the colossal bronze of TAMANEND in Philadelphia, Pa, located on Penn’s Landing along the Delaware river. TAMANEND commemorates the contributions of Native Americans Indians.

Raymond Sandoval is a graduate of the Pennsylvania Academy of Fine Arts. he was born and raised in jemez springs, new mexico, in SANDOVAL COUNTY. his family ancestry dates back 500 years. 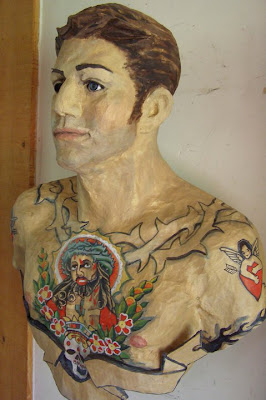 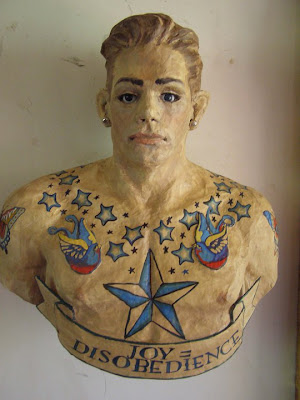 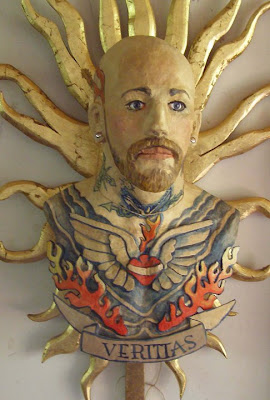 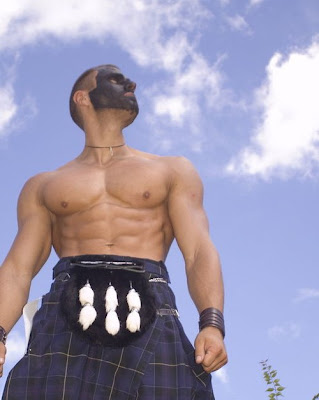 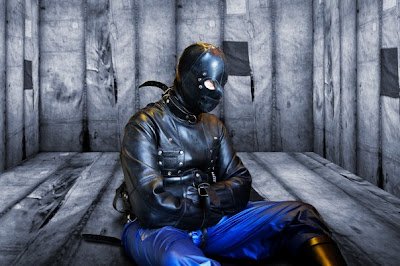 photo courtesy- Jacket Bound
Posted by Antebellum Gallery at 7:14 AM No comments: Links to this post 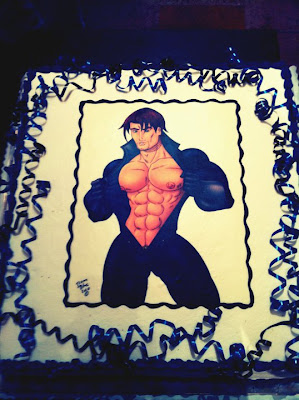 the wedding cake of ICEMAN BLUE, created by the torrence bakery.
photo courtesy- Erica Liscano
Posted by Antebellum Gallery at 6:02 AM No comments: Links to this post