THE PURITY, PERVERSION AND ENDURING STYLE OF HUSTLER WHITE


THE PURITY, PERVERSION AND ENDURING STYLE OF
HUSTLER WHITE

Cited as a reference behind Pieter’s ‘hustle’ inspired SS17 collection, Bruce LaBruce and Rick Castro’s film gave us one of fashion’s most enduring queer style moments

Bruce LaBruce and Rick Castro’s 1996 oiled-up purity nuke Hustler White gives you “the truth, the whole truth, and nothing up your butt.” Or so the narrator promises. (And, it’s worth noting, he delivers.)
A nebbish, freckled man called Jürgen Anger (LaBruce) flies in to LA looking to write a book about the LA hustling scene. He comes across a hustler named Monti, played by tanned and muscled model Tony Ward. Monti accidentally kills a male prostitute in a hit-and-run, mops up the blood with his tank top, and discards it on Santa Monica Boulevard, strolling away with the sun glistening off his rippling torso. Upon discovering this disposed, blood-drenched tank top, Anger sniffs it for pleasure, lusting after him. After managing to pin him down (plus offering a cool $1000 fee), Monti acts as his guide into the world of pulling tricks for change. It’s for “research”, and while it’s taking place we’re given a dizzying tour into the colourful S&M encounters of male escorts.
Like much of LaBruce’s work, Hustler White is a peek through the glory hole into the stimulating world his mind occupies. This one’s not for the faint of cock. It’s a black comedy that, despite its lo-fi, scrappy makings, still manages to challenge conventions of white bread sexual impulse 20 years on. There still are no movies like this. And it’s continuously pinging off the hallowed walls of underground culture. Monti – with a crisp, white t-shirt folded up just above his ballooning pecs – provides a meaty, lasting image: an amalgamation of our sexual and sartorial desires, masquerading as burly escorts mooning about on the strip.
Hustler White is a buffet of looks. Most recently, Pieter designer Sebastiaan Pieter called upon the rock hard midriffs that parade through the film for his SS17 collection, noting it as a key reference. Specifically, Ward’s character Monti, whose loose-slung and frequently unbuttoned jeans were translated into ultra-low-rise wool trousers.

While also the film’s title, hustler white is referenced as a colour. You could play a drinking game with all the deliberate cameos of the colour white in the film: crop tops, cars, buildings, bodies. The symbolism acts as a welcome buffer for the contrasting smut, making it appear that much more shocking when a scene cuts from the exterior of a white building to the interior, where porn is being filmed as half-naked men stand by as witnesses. Monti’s job is to ‘reinvigorate’ the performers when they lose steam. Towards the end, he is asked, “Why do hustlers wear white?” The answer: “purity.” It may seem cliché ever since Madonna shoved it down our throats in an Arianne Phillips’ white dress for “Like A Virgin”, yet it’s in the cliché that LaBruce rewrites his narrative. Likewise, here the colour – redubbed “hustler white” – is to be taken at face value.

When it was released in 1996, the film was viewed as controversial because of one scene where an amputee uses the end of his amputated leg to anally penetrate his partner. Shocking? Sure, but it’s a cold shoulder to the heteronormative stories that persevere in exacting their machismo at the cinema. It’s unapologetic in its realism – of course, this shit happens somewhere, we are just rarely privy to it – and that’s what makes it so outrageously thrilling to watch. It’s like the Donald Trump of queer cinema: it may repulse you at times, but I dare you to look away.
Already a successful model, Hustler White’s in-your-face queerness helped secure Tony Ward’s status as a cult gay icon. He often lent his aquiline nose and sturdy frame to campaigns for Givenchy, Dolce & Gabbana and Yohji Yamamoto. Whereas they sealed his fate as a supermodel (he is currently listed on Models.com’s Supers board), none would know that these brands were desperately trying to bottle the potent image of his character Monti in Hustler White: floating in a jacuzzi, innocently playing in the bath, or reading a book on a nearby toilet amidst a porn shoot. Just look at Givenchy’s SS15 watch campaign (above) – seem familiar?
Where Hustler White most importantly came off as innovative was in its rehashing of Billy Wilder’s Sunset Boulevard, this time transposed against the backdrop of the Santa Monica hustling strip. Now we see plenty of meta films about Hollywood. In the past couple of years alone we had Maps to the Stars, The Canyons, and, its French counterpart, Clouds of Sils Maria. None today are quite as risqué, lusty or pure. None so perfectly marry the abject sex drive this film inspires with a total lack of fucks left to give.
READ MORE-
ALL PHOTOS- RICK CASTRO- COPYRIGHT 1995 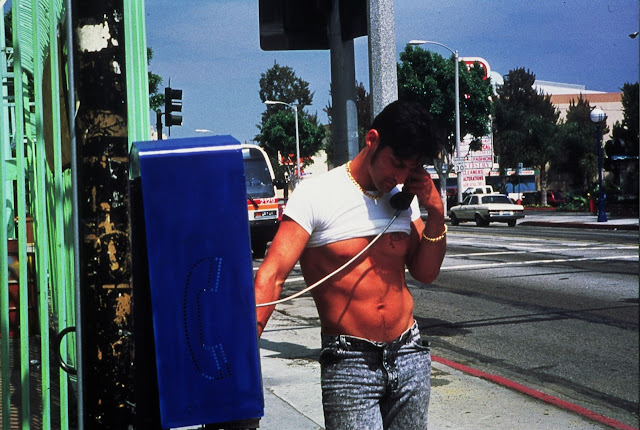 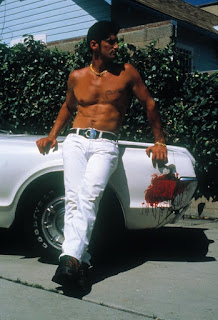 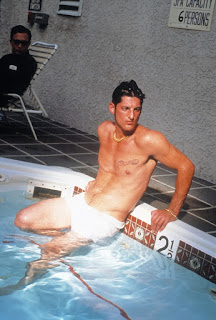 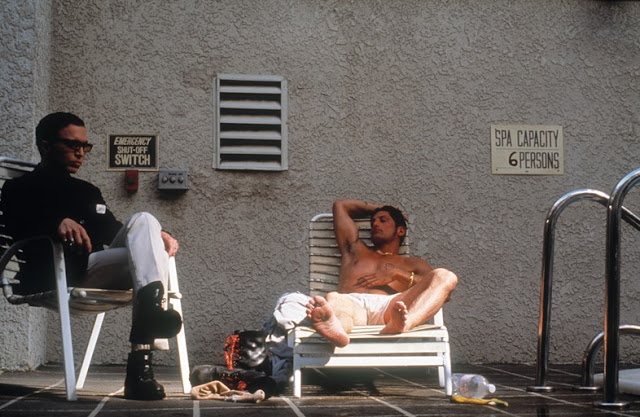 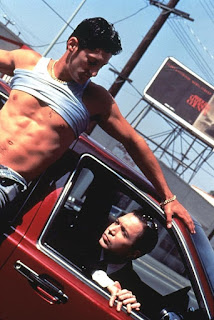 Posted by Antebellum Gallery at 2:47 PM