THE LOGIC OF A DICK 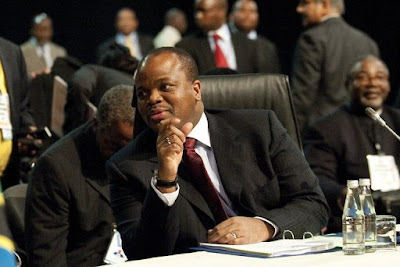 MANKAYANE, Swaziland — Swaziland's King Mswati III called Friday for his male subjects to get circumcised as he endorsed a campaign aimed at tackling the world's highest HIV infection rate.

Flanked by a large royal contingent including his mother, who rules alongside him, four of his 13 wives and several children, Africa's last absolute monarch said men and boys needed to get circumcised to help fight the "terrorist" virus, which infects one in four adults in the kingdom of nearly 1.2 million.

Studies have found men without a foreskin are 60 percent less likely to get HIV, the virus that can lead to AIDS.

"It seems fitting that our men and young boys should be given an initiative that will help them fight this disease," Mswati told a gathering of thousands in the southern town of Mankayane, where he gave his official endorsement to the campaign.

"This virus I shall liken to a terrorist. It is here to finish off our people."

Mswati was entertained by bare-breasted teenage girls, troops of warrior regiments and a military brass band.

Urging his nation to "take care of your lives -- stay away from activities that could give you the disease," the king struck a very different note from his pronouncement to parliament a decade ago that HIV-positive people should be "branded and sterilized".
READ MORE-
reposeded by- kate mcconn- inglewood/antebellum corespondent
Posted by Antebellum Gallery at 12:02 PM